What was happening centuries ago at the Haudenosaunee (known as Iroquois) in today`s northeastern United States is now a topic for the whole world. For generations their history has been passed on. Chosen peacemakers were guarding the peace principles, doing their best to spread them. At that time, one single man managed to remind people of a peaceful life before the war. He succeeded in uniting five nations (later on the Tuscaroa as the 6th tribe of the same language family joined, too). Over the decades all tribes in the wider area were joining this great peace. Thats were the peacemaker principles, which are still guarded by the descendants today, originate from.

Jon Young, who knows the story originally from peace ambassador Jake Swamp, has told it many times in his events. Because it is as important today as it was then, I will share the essence with you. I even feel this is my duty because history prophesies that one day the world will need these principles – I`m convinced this time has now come.

Prehistory of the 5 nations

For generations the Haudenosaunee (known as Iroquois) had been at war with each other. Nobody knew the main reason anymore for the brutal clashes. – If you look around the world today, there are many such places of war.

– At that time, a boy was born who, since childhood, spread the word that he was the peacemaker, but everybody smiled at him.

How did the peacemaker convince the warriors? Listen to Jon Young telling the Story:

After the peacemaker passed the test, all Mohawks accepted the laws of peace. Traditional roles for women and men were installed, laying the foundations for democracy.

War will never end, unless we heal historical trauma

How was historical trauma healed ?

Iroquois democracy is the oldest and purest one on earth! Modern democracy doesn`t give nature a voice.

The constitution of the United States is based on the Iroquois agreements, with the crucial difference that unity became a two-thirds majority because it can be reached faster. In many areas it can be seen that this is like a brake pad on the impact of a goverment.

The messages of the peacemaker are very important today:

The peacemaker spoke of us all living under the sky like underneath one roof. Earth nourishes us all and we share it with all fellow creatures … all are equal. That is the right that was granted to us when we were born. Over and over again he creates a positive picture of a peaceful coexistence – exactly what we need right now on all continents. His message: Follow the principles. Everyone can achieve peace. Forgiveness is not done all at once. It needs to be repeated over and over again to clear through all levels.

Nature is the foundation of peace

More and more people are realizing that our behavior is destroying our foundation of life. World peace is only possible if the elements and all living beings on this planet are treated with respect. Do you agree?

Journalist Claus Biegert, an insider of native northamerican history, reported very clearly on the Iroquois on a radio broadcast:

With the headline: „The monster and the peacemaker“ you can read in his paper; „About 1,000 years ago, the tribes who are allies today lived in a feud ruled by thirst for blood. Albeit related, they sought each others lifes. Parents worried about their children every day, since cannibalism was quite common.“ …

.…“The peacemaker used reconciliation as a tool and transformed the man (Tadadaho/ a former warlord); made him a new person. He ended the principle of revenge, which drives people to war again and again.“

At the end of the broadcast 84-year-old Onondaga chief Oren Lyons says: „People have to stand up and intervene and become aware of their power. You were and are the authority. As long as you wait for someone to tell you what to do, you will wait a long time.”

Become an ambassador of peace

BE an AMBASSADOR of PEACE … 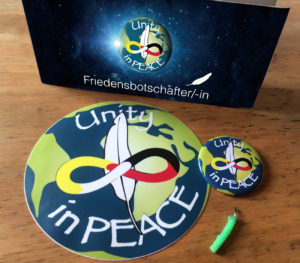 If you want to live the peacemaker principles as we have described them on the sub-pages, you can become an ambassador of peace and convey this to the outside world. Here you find out how —>

From the “Hopi Peace Declaration”:

“The fire FOR something will burn eternally. The fire against something consumes you and will burn you” (Adriana Meisser/Saint Germain)

Youth will again put up the TREE OF PEACE. That`s the Mohawk prophecy. That time is NOW. (Interview with Jon Young)

Become an ambassador of peace